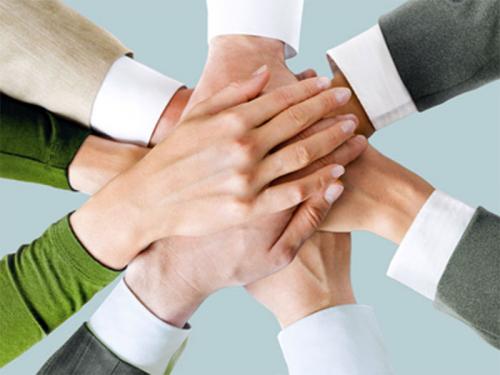 This year well ran into the memory. Every day at six in the morning, four young specialists who not long ago graduated from institutions and were not needed by anyone after the company in which they worked broke up in the midst of the crisis, were sincerely happy to meet at the entrance of the plant of Biophysical equipment. And without noticing the fatigue accumulated over the last months of exhausting work, we discussed the plans and again distributed the responsibilities for each day.
Our belief that everything will turn out, that we are doing the right thing and we are waited in the hospitals by our dear customers, led us through the bad weather and the twilight of the chaos that was going on in the country.
At the same time our colleague had a daughter. In spite of everything, unanimously, we give all the earned funds to this family and on the same day we make a decision to create the company ForMed.

"For Med" - because we are needed for medicine, we sincerely believed in it then, and we know it right now. 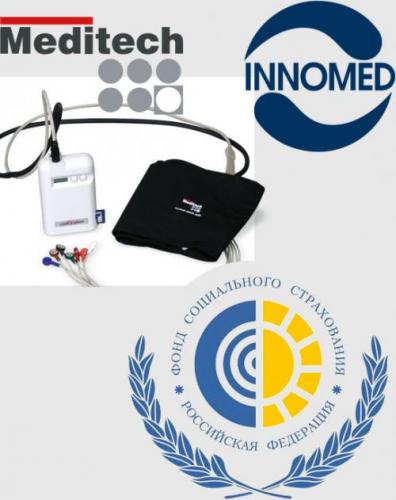 Foreign contracts were concluded with the manufacturers of medical equipment "Meditech" and "Innomed", Hungary.

Together with the Sklifosovsky Research Institute, the first daily monitors (holters) were launched on the Russian market.

A large tender was won for the reconstruction and equipping of all health resorts of the Social Insurance Fund of the Russian Federation with medical equipment. 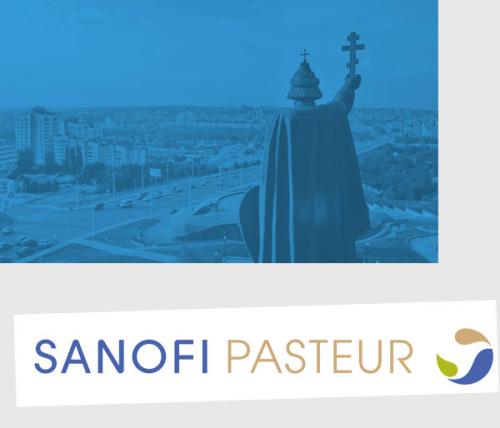 The first branch in Belgorod was opened. 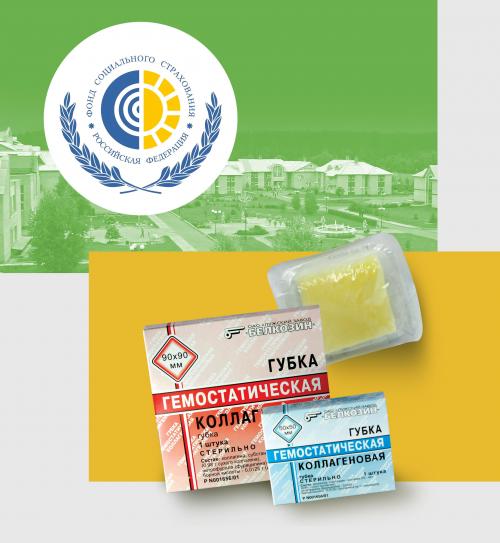 A contract was signed with the Luga plant Belkozin (meat and milk company Parnas)
For the introduction of hemostatic collagen sponges on the market. 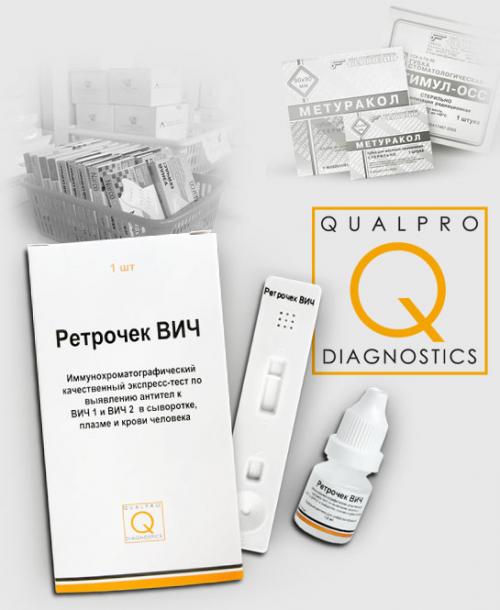 The department of expendable materials is organized.

Main directions:
- the implementation of rapid diagnostic tools,
- realization of medical products on the basis of collagen.

A foreign contract was concluded. The rapid tests of Retrochek for HIV and other infections, produced by Laboratories "Oxford" are brought to the market. 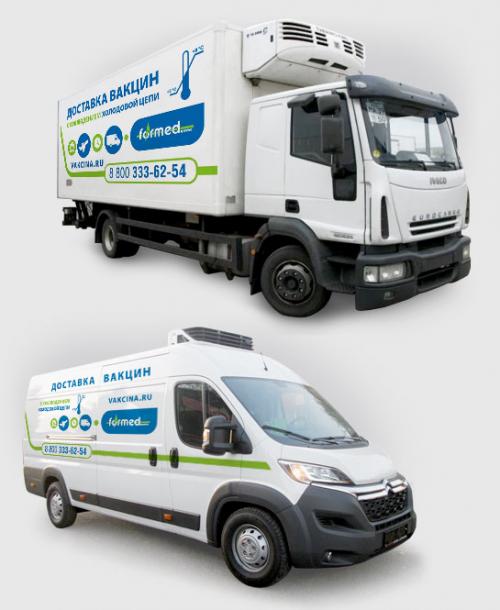 On the basis of the logistics department of the company Formed, the Association RusTeleMed was established, a specialized carrier of medical cargoes under the Cold Chain.

- Own fleet of refrigerated trucks

- Accreditation by all major vaccine manufacturers

- The only carrier of vaccines in the Russian Federation has on-board accreditation on air transport. 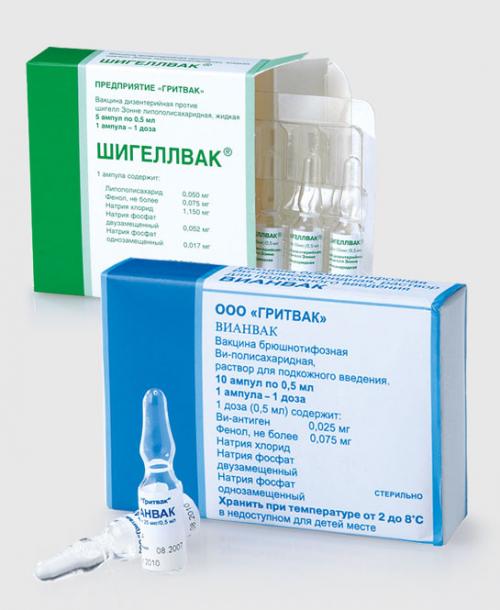 The Department of Immunoprophylaxis is organized. Contracts have been signed with all major domestic vaccine manufacturers, including 15 enterprises that are now part of the Microgen Research and Production Association.

Formed becomes the leader of vaccination against influenza and sells about 5 million doses of vaccines.

Together with the company "Gritvak" and the Institute of Immunology, Moscow, the launch of the domestic vaccines on the market:
SHIGELVAK - against dysentery,
VIANVAK - against typhoid fever. 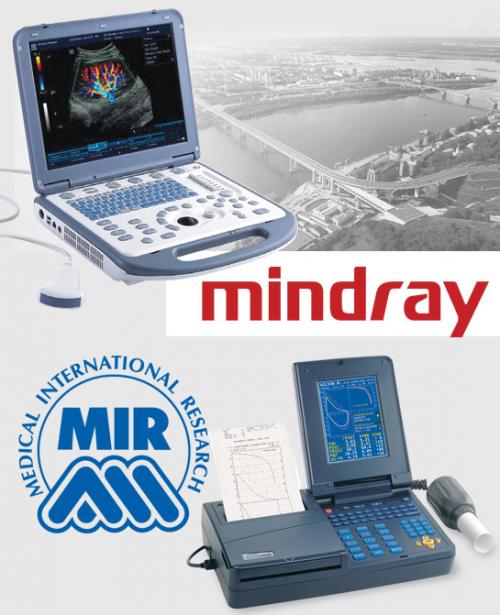 A branch in Nizhny Novgorod was opened with the subsequent transformation into "ForMed-NN". A year later, on the basis of the company, the Danko Medical Center was opened, specializing in vaccination of all population groups.

A foreign contract with the Chinese company Mindray has been concluded and a new generation ultrasonic scanner has been launched on the Russian market in an affordable price category.

A contract was concluded with the Italian firm MIR, the leading European manufacturer of spirometers. 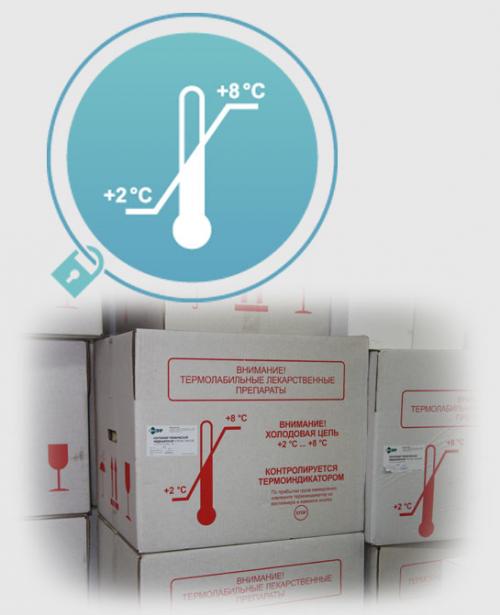 The office and warehouse complex in Moscow on Profsoyuznaya street, house 128 is purchased. The licensing of the newest modern pharmaceutical chambers for storing vaccines is being carried out.

On this basis a separate joint-stock company is created. Diversified Medical Company "Formed" The range of supplied supplies for hospitals has been significantly expanded. 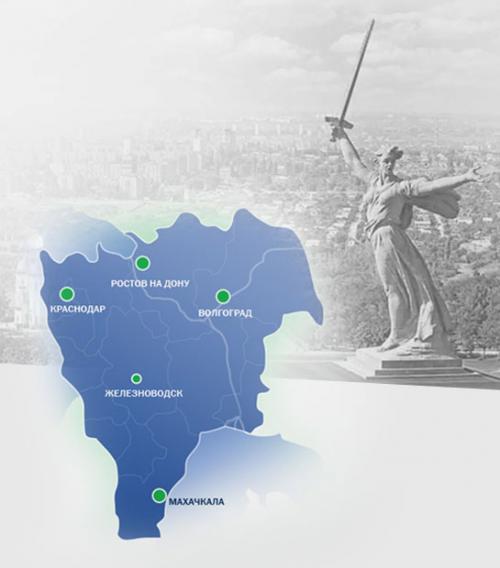 The branch in Volgograd was opened with the subsequent transformation
In the "ForMed Volga". Today it is the leading enterprise in the Southern Federal District. He carries out storage and delivery of vaccines, works in the field of information support of doctors of the region on modern aspects of vaccination prevention. Has its own retail structure. 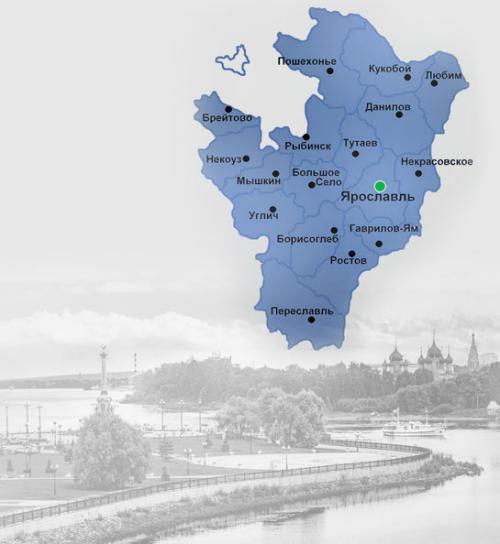 In Yaroslavl, a branch was opened and was later transformed into Freem-Yaroslavl. Today it is the largest wholesale regional supplier of medicines, vaccines and serums, parenteral nutrition. Has its own pharmacy. 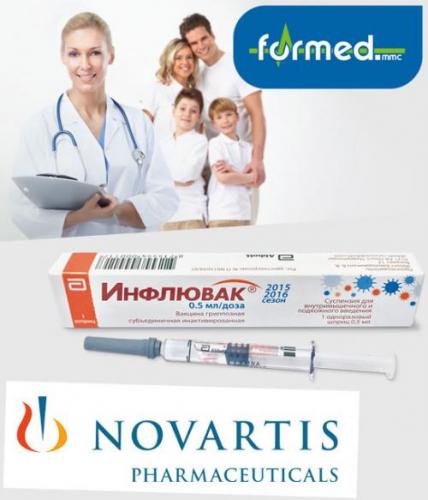 In Yaroslavl, the Medical Center "ForMed" was built and licensed - a specialized family center for working with children 0+ and adults. Today the center is leading in the city on vaccine prevention and the introduction of innovative products and techniques in private medicine.

A contract has been concluded with the second largest vaccine manufacturer in Europe, the German company Kairon Bering (now the unit of Novartis). For this, the DMC "ForMed" was certified according to international GDP standards.

Contract with the Dutch company Solvay Pharma for the supply of the Influvak vaccine was concluded. 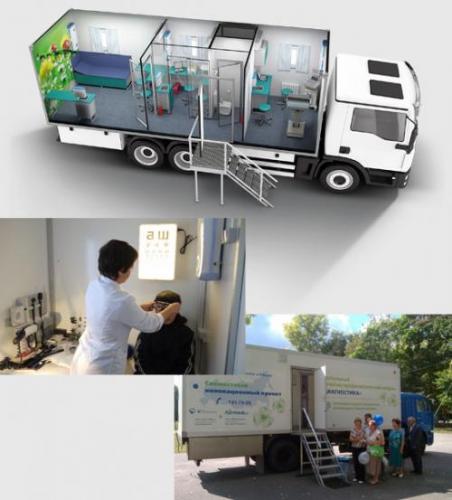 2010 - 2011 years. The first prototype of the Mobile Medical Complex was developed for mass medical examination of the population. Large-scale testing of mobile complexes throughout the country, approbation of complexes by regions in different climatic zones were carried out.

Complexes are presented to the country's leadership and relevant specialists of the Ministry of Health within the framework of the Belgorod Forum of Rural Intellectuals. 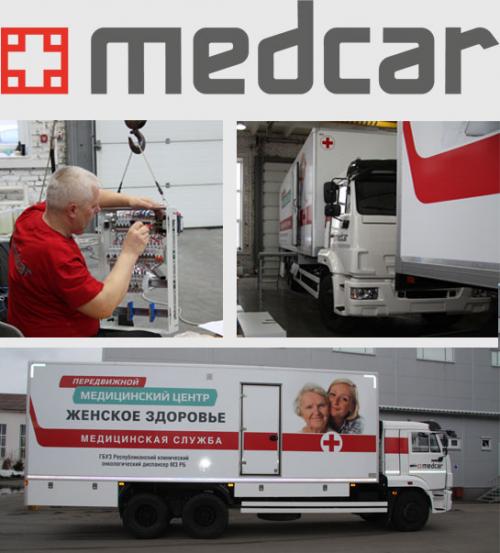 The company has built and licensed its own production base in the city of Zhukovsky - Naukograd (Moscow region).

The Scientific and Production Company Medcar was established. The production of a wide range of Mobile Medical Complexes under the patented name Medcar has been organized. Registration certificates of the Ministry of Health and ISO 9000 certificates for serially produced complexes have been obtained. Agreements were concluded with the main manufacturers of cargo chassis - KAMAZ, VOLVO, Mercedes, GAZ, etc.

In the aftermath of floods in the city of Krymsk in the Krasnodar Territory in 2012, ForMed has become a single supplier of vaccines for the Ministry of Health of the Russian Federation and FMBA. In the 2-day period vaccines were vaccinated for the prevention and treatment of intestinal infections all the population of the affected areas. According to the Ministry of Health there is not a single sick person. 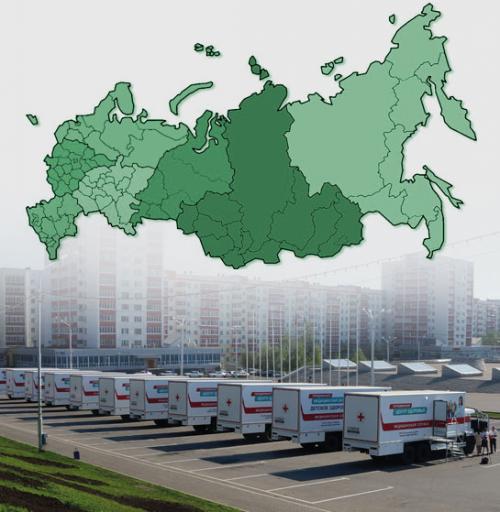 Mobile Medical Complexes are included in the priority national project "Modernization of Medicine". In this and the following year, various mobile medical complexes were manufactured and delivered to more than 45 regions of the Russian Federation.

ForMed Volga, Volgograd. An office and warehouse complex with modern refrigerated chambers was built and launched.

In the aftermath of the disaster after the flooding of the Far East in 2013, the DMC "ForMed" became a single supplier for the Ministry of Health of the Russian Federation and FMBA of Russia. In a week, more than 100,000 doses of vaccines have been delivered to prevent hepatitis A, dysentery, typhoid, anthrax. Tens of tons of bacterial phages. There was not a single violation of the "Cold Chain" and not one sick! 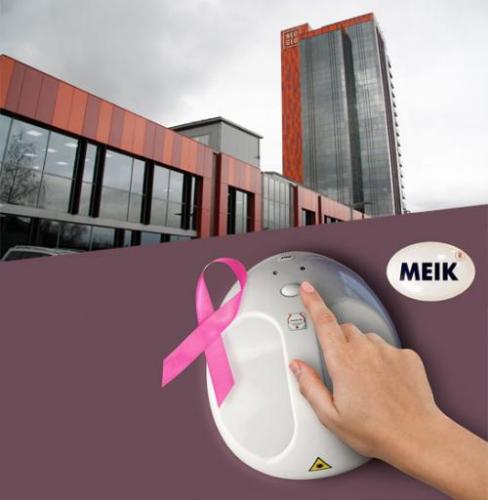 The central office for the group of companies "ForMed" was built and put into operation at the address: Butlerova 17, Moscow.

A contract has been concluded with the developer of Sim Technology for the development and implementation of a new generation of "MEIK" for the mass screening of the population in the practice of Mammograf's health care.

Together with the specialists of the Bakulev Cardiology Center and under the personal control of Leo Antonovich Bokeria, a mobile complex "CardioMobile" was developed. 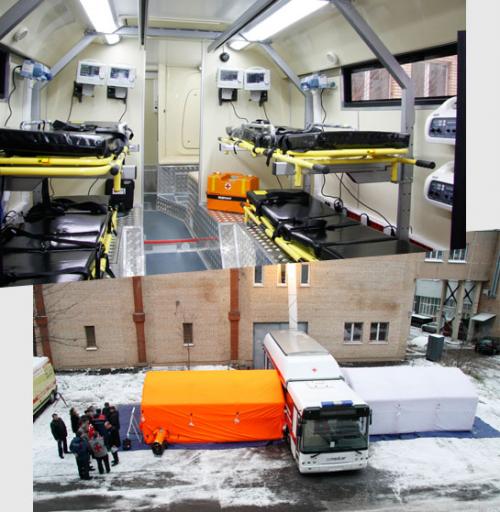 The first mobile complex for the Medicine of Catastrophes "MedEsCord" series "Stolitsa" was created in Russia, for work with mass emergencies. This multi-section rapid deployment complex on the basis of the city bus was developed in conjunction with the Catastrophe Medicine of the Russian Federation. Approved by industry experts in the framework of a profile conference with international participation. Was presented at the exhibition "Army 2016" at the stand of Medicine of Catastrophes.

Certification was completed and a contract was signed with Glaxo Smith Klein Beecham, one of the world's leading vaccine and medicines manufacturers.

A contract was concluded with the Ford company, an innovative domestic full-cycle vaccine producer (part of the Rostekhnologii group of companies). 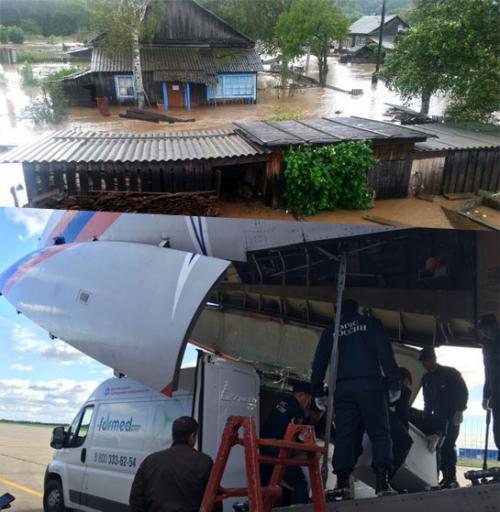 In case of liquidation of the consequences of the typhoon "Lazhonrok" in Primorye, the company "ForMed" became the only supplier for the Ministry of Health of the Russian Federation and FMBA.
In full and as soon as possible, all victims were delivered with vaccines and bacteriophages for the prevention and treatment of intestinal infections.

The beginning of deliveries of vaccines, mobile medical complexes and mammographs to the new subject of the Russian Federation - the Republic of Crimea